For information on classic, pre-2004 Wacky Packages stickers, visit the most complete resource on the Web, wackypackages.org.

Topps issued the first wave of All-New Series 2 in a Test Release to limited markets in spring 2005. It was followed in summer by a Nationwide Release which introduced changes to the series' packaging and to one of the insert sets.

almost ten months after the publication of All-New Series 1. Originally slated for Fall of 2004, the publication of the series was delayed to allow ANS1 more time to sell through the market. The Test Release was targeted at the New York metropolitan area, in which 2004's ANS1 had seen impressive sales. ANS2 boxes were soon to be found in limited quantities at stores such as Wal-Mart and Target in other cities as well. Cases and boxes were also readily available on eBay, where pre-sale auctions had begun up to a month in advance.

The tattoo subjects were based on 10 titles from the base set, while the clings were derived from classic Wacky Packages stickers from 1967 to 1985.

Some quality control issues were seen with the Test release, including packs that contained fewer (or more) than 6 stickers, and small tears on the backs on the chase cards. Collectors who sent their damaged cards back to Topps quickly received replacements.

The second wave of ANS2 went on sale in hobby and retail outlets nationwide on July 20, 2005—more than four months after the Test Release. (Topps promotional material in March had indicated a June release, but in April the date was revised to late July.)

The Nationwide Release included changes and additions to the Test issue, most notably:

Joining the Nationwide Release on the shelves about a week later were additional new items, including:

Click on the hyperlinked names for additional information about individual titles.

Starting in the summer of 2004, promotions for ANS2 included giveaway cards; flyers and other printed advertising; ads on the Web; and a television commercial.

Visitors to the Topps booth at the 2004 San Diego Comic-Con (July 22-25) received a sneak peek at ANS2 when company representatives gave away the "Goodbye Kitty" advance promotional sticker, numbered P1.

Topps distributed a free card (not a die-cut sticker) at the 2005 San Diego Comic-Con (July 14-17) which served as a promotion for both ANS2 and a tease for All-New Series 3, which was then five months away from its initial release.

The image then appeared on base card #29 in ANS3.

This sheet previewed display arrangements for the Nationwide Release of ANS2.

Included in each ANS2 hobby box (coded 1-777-30-02-4) was a poster meant to be hung in specialty stores such as comics and card collectible shops.

The poster design is very similar to the layout of the back of the "Annoying Spitter-Man" promo card; a variation on the theme was also used in magazine ads.

Panel 1 (front cover) of the tri-fold brochure appears as the outside door of a school locker, plastered with ANS2 Wacky Packages. When the brochure is opened, panel 2 (inside front cover) appears as the back of the door, with more stuck Wackys. The folded-over panel 5 depicts the interior of the locker with a box, packs, more Wacky stickers, and a cameo appearance by a Garbage Pail Kids sticker from All-New Series 4, "Nin JACK", (painted by Luis Diaz, the artist of ANS2's "Starducks"). Panel 5 folds back to reveal panels 3 and 4, which provide details on the series and depict a mock-up of the box, packs, sample base stickers, and inserts. Finally, panel 6 (back cover) lists some of the expected promotions.

An early version of the "Locker" brochure was apparently issued for the Test release. Based on the scans of it from eBay auctions, it appears to be a two-sided flyer, but this has not been confirmed.

While there were many web pages that promoted All-New Series 2, this section concentrates on official Topps web content, including company ads on non-Topps sites.

According to Topps' promotional material, a commercial for ANS2 was given a tryout in the New York market at the time of the Test Release.

The ad began running nationally on Nickelodeon and Cartoon Network on August 22, 2005. 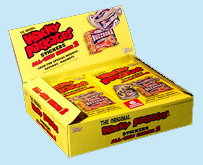 The color scheme for ANS2 packaging was bright yellow with a red Wacky Packages logo. The logo was preceded by "The Original", perhaps to ensure that Topps' Wackys would be distinguished from unauthorized bootlegs, as well as from fan-produced tribute series such as Package Parodies, Pranky Products, and Silly Supermarket Stickers.

ANS2 foil wrappers were yellow with a red logo—a fitting follow-up to ANS1's red packaging, since in the Wacky lines issued in 1973 and in 1979, yellow packs followed red.

Packs contained 6 cards, with a 1–in–4 packs chance of finding a cling insert, and a 1–in–6 chance of pulling a tattoo. They could be found in priced (99 cents) or unpriced versions.

The back of the pack wrapper announced that Topps Vault auctions for ANS2 art would begin on June 1, 2005.

For a thorough breakdown of the dizzying array of packaging variations offered in the two waves of ANS2, see Greg Grant's page, "Wacky Packages 2005 Boxes, Shipping Cases and Packs."

One illustration on the flyer showed the unpublished "Slacker Jack" sticker in an album pocket, perhaps a hint that the flyer was developed at a stage when "Slacker" was still on the series checklist.

A case contained 2 boxes with 10 albums per box.

Wacky Packages ® & © The Topps Company, Inc.  All Rights Reserved
(This page is not authorized or endorsed by Topps)